Soap is a duo-exhibition by Maria Gondek and Emilia Bergmark. Soap was presented by Sirin Gallery and hosted by Nicolaj Bo kitchen manufacturer at their showroom at Frederiksberg, CPH. 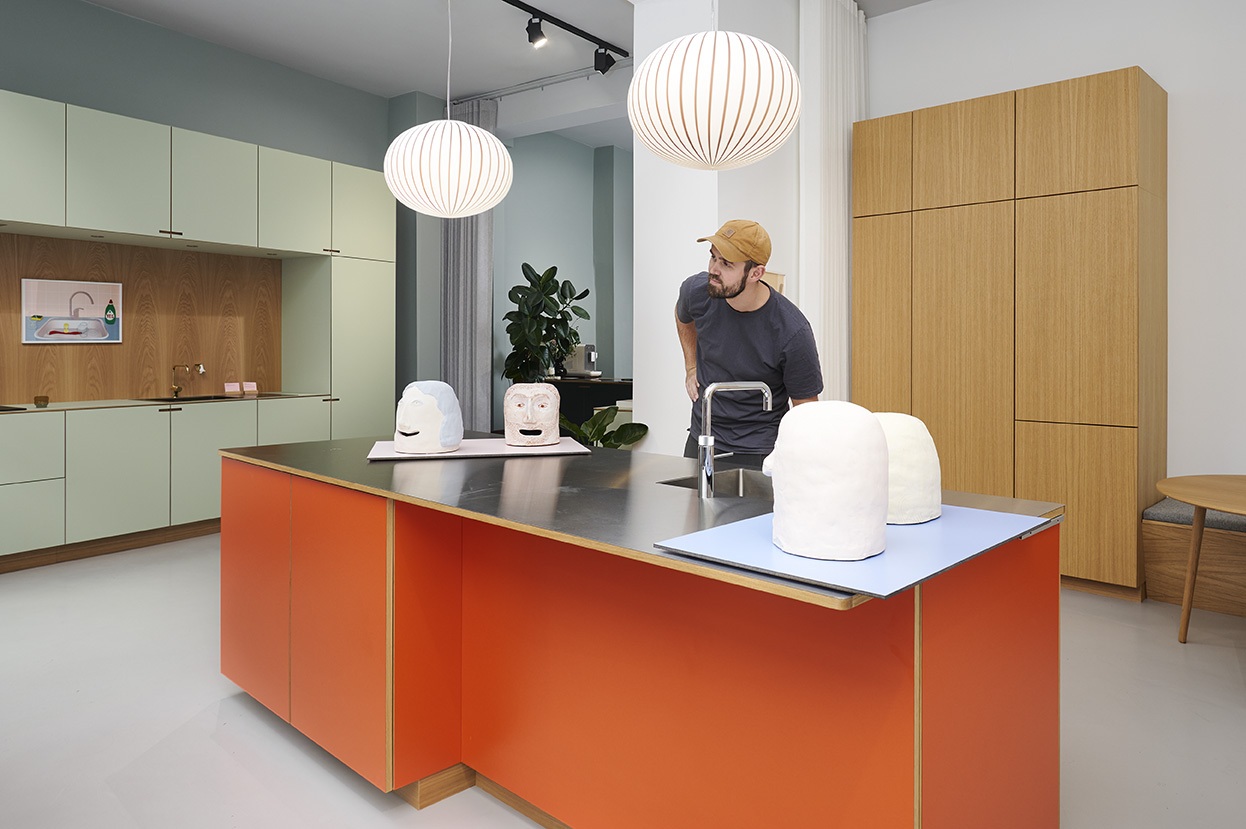 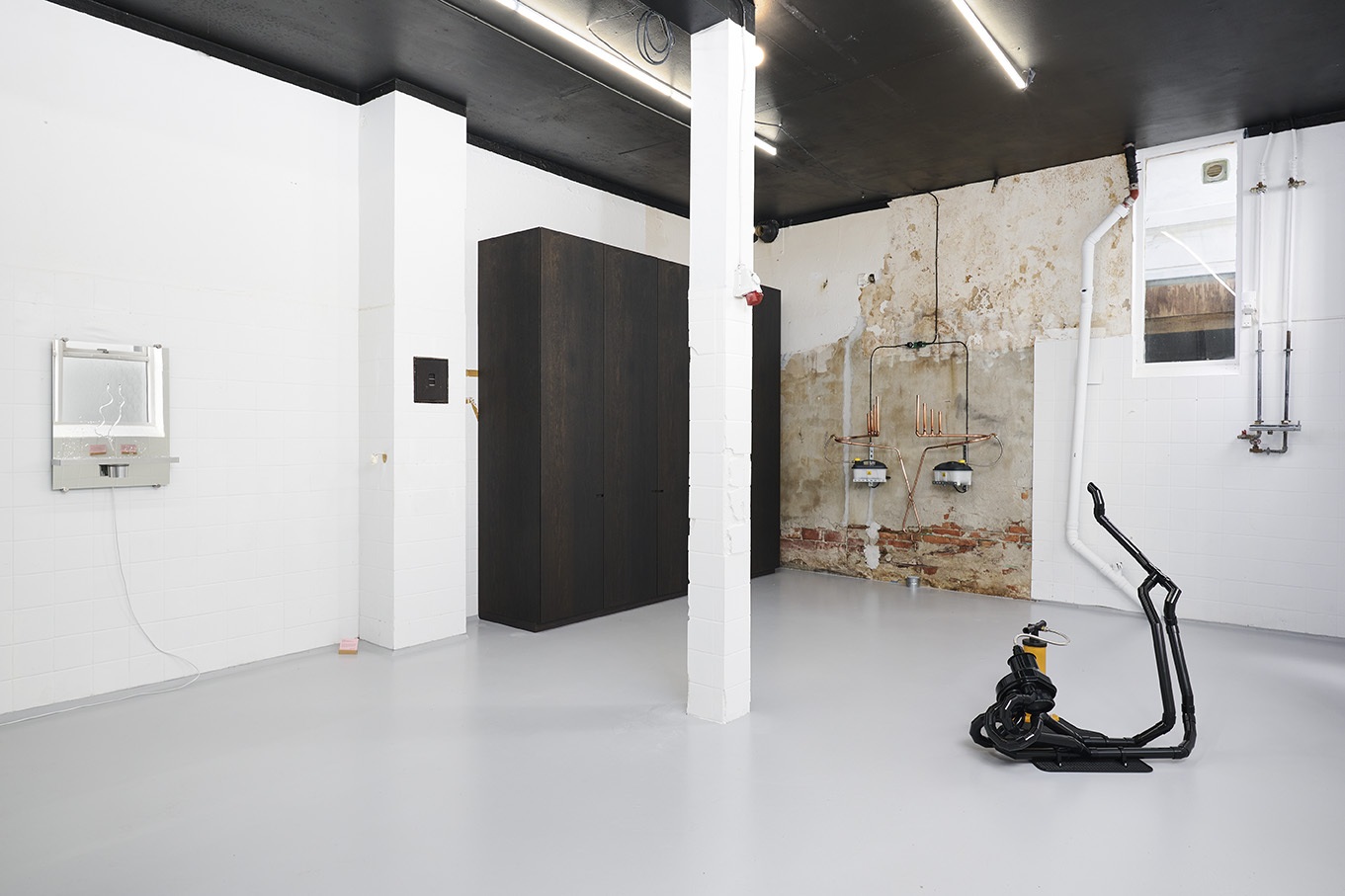 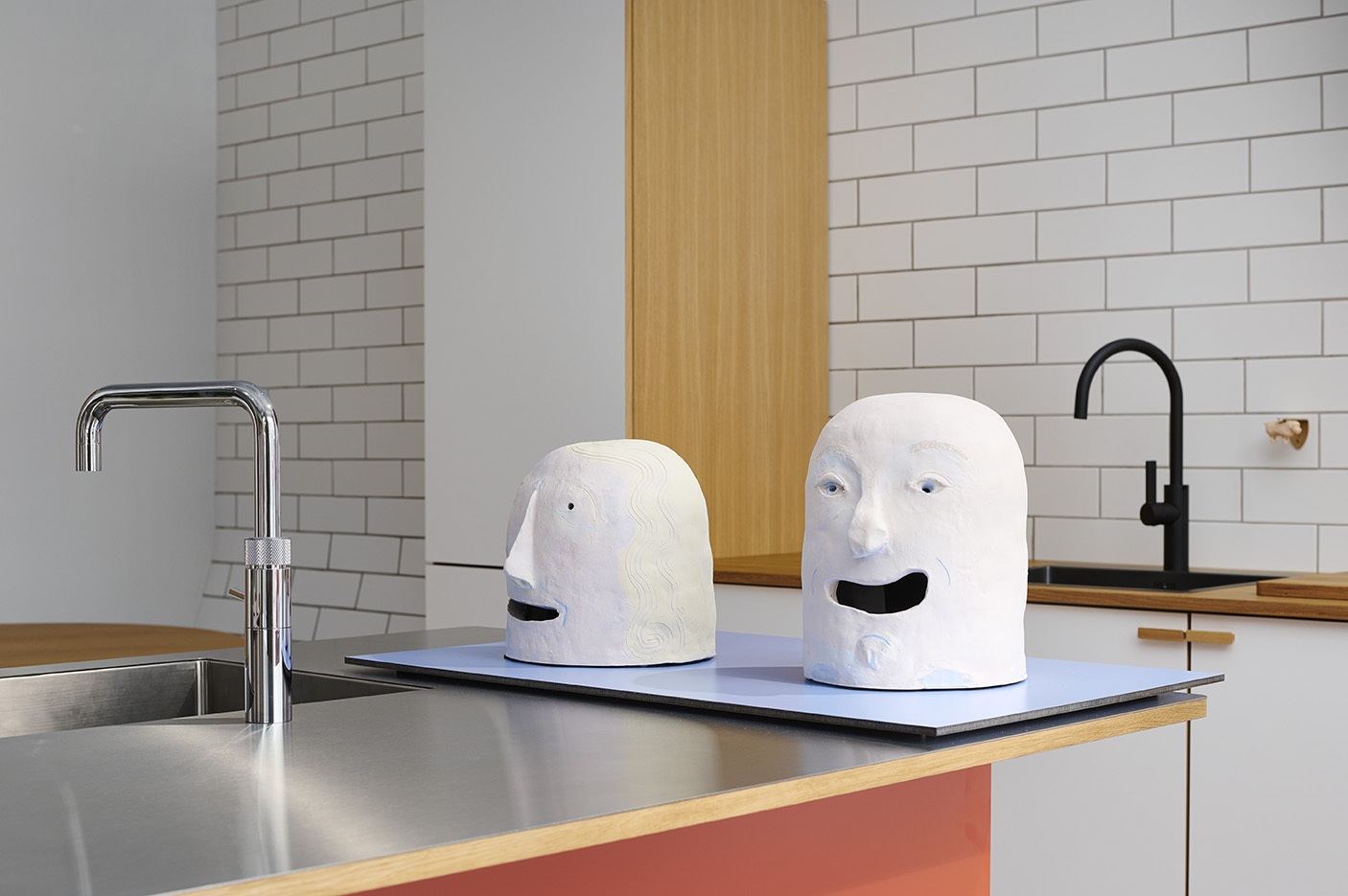 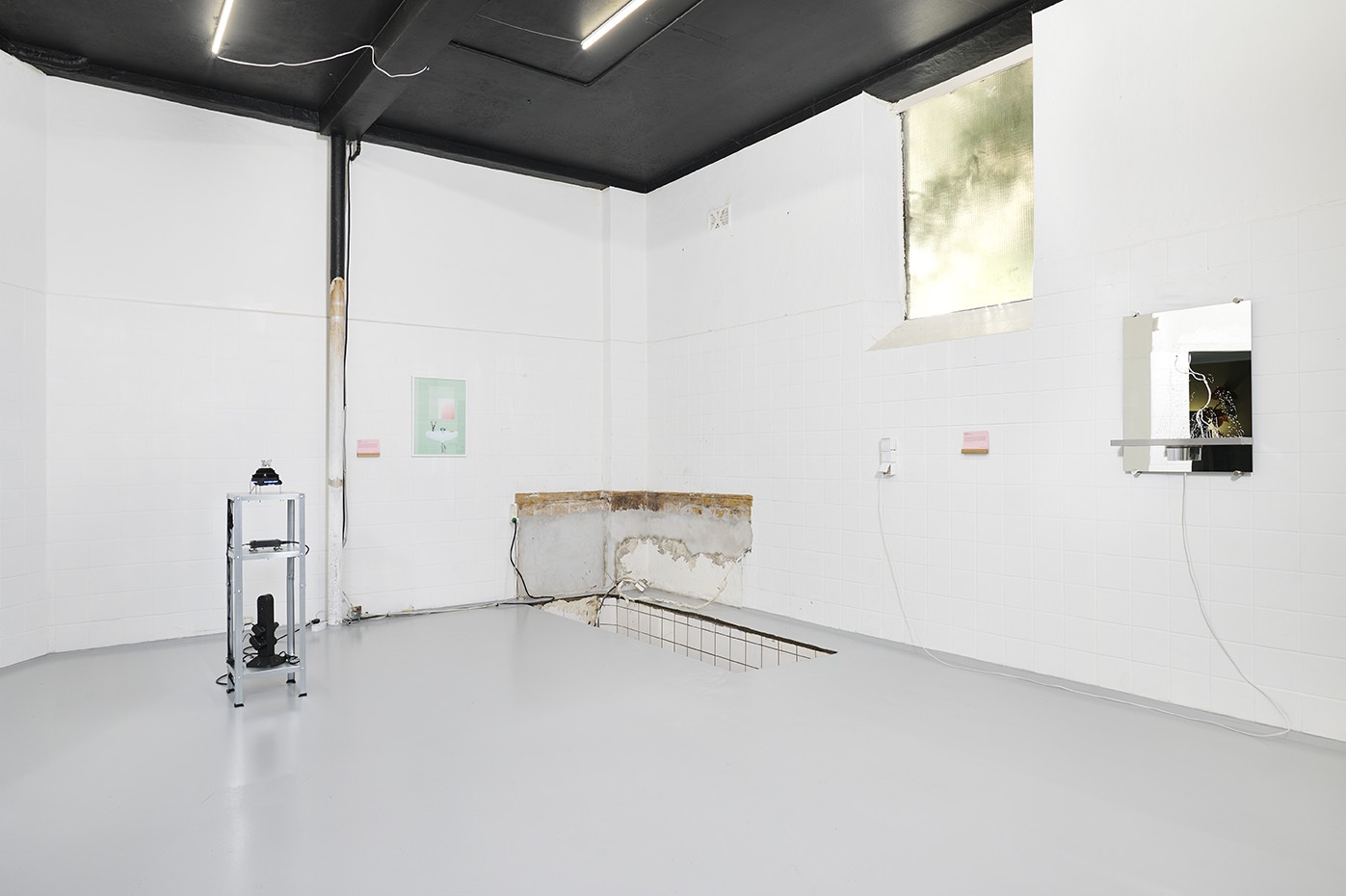 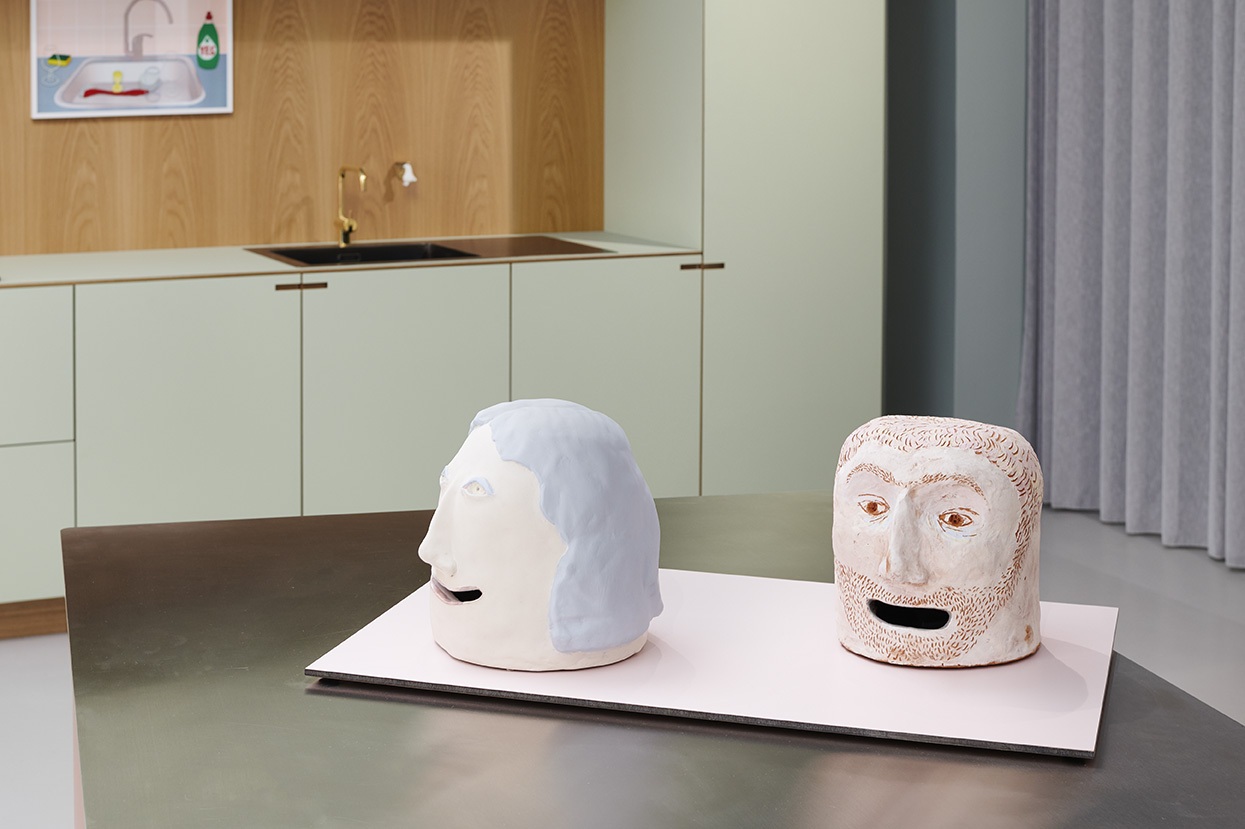 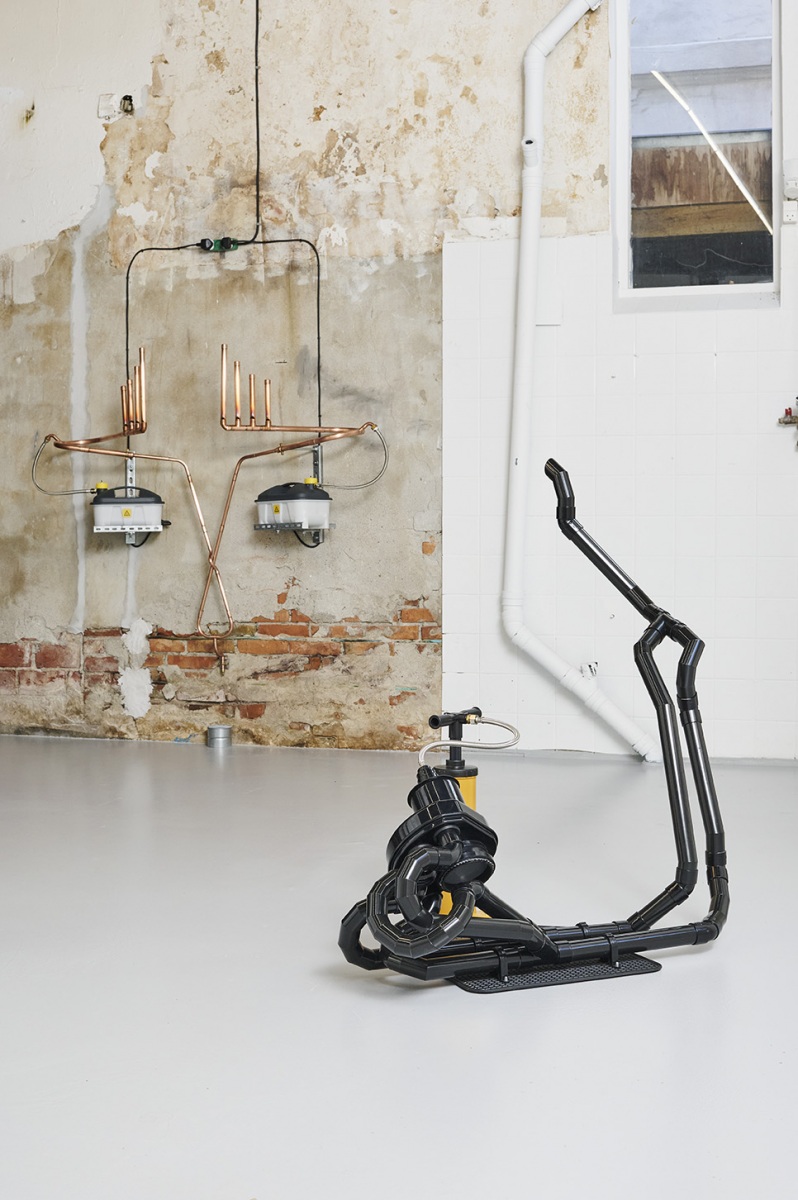 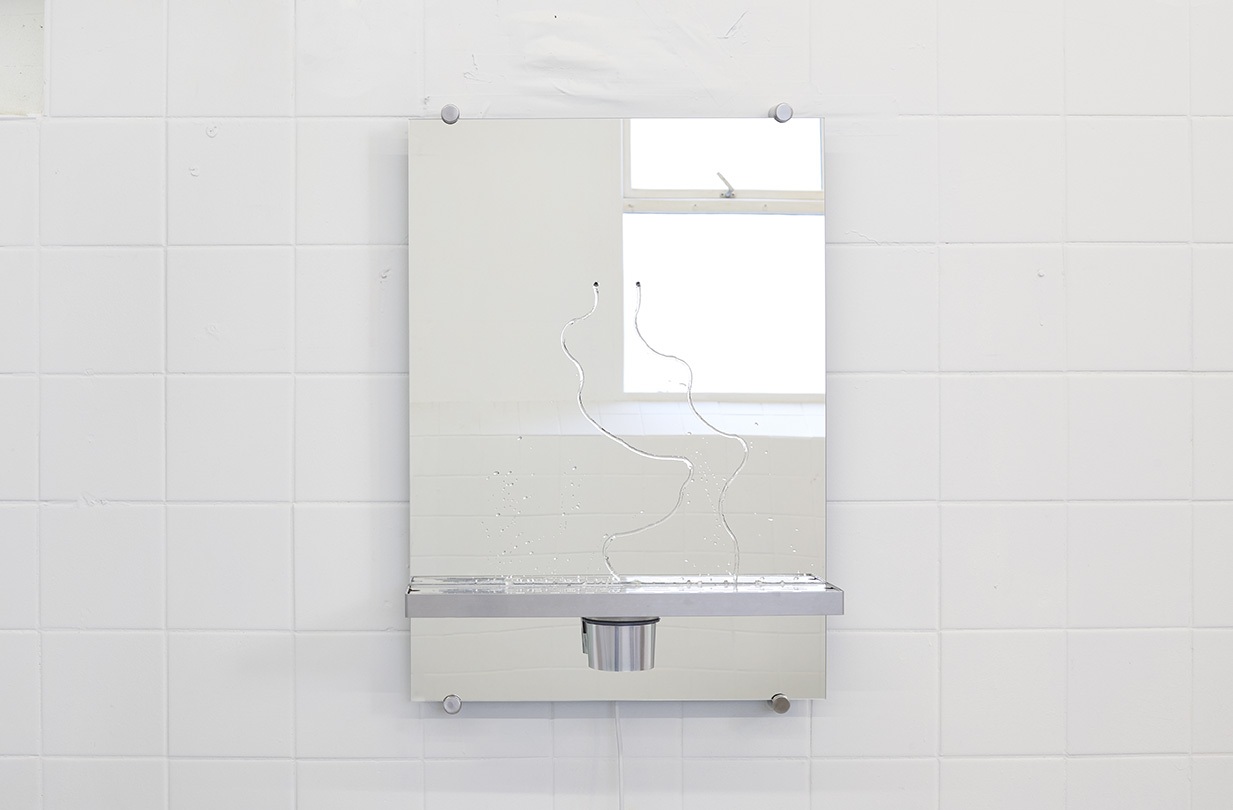 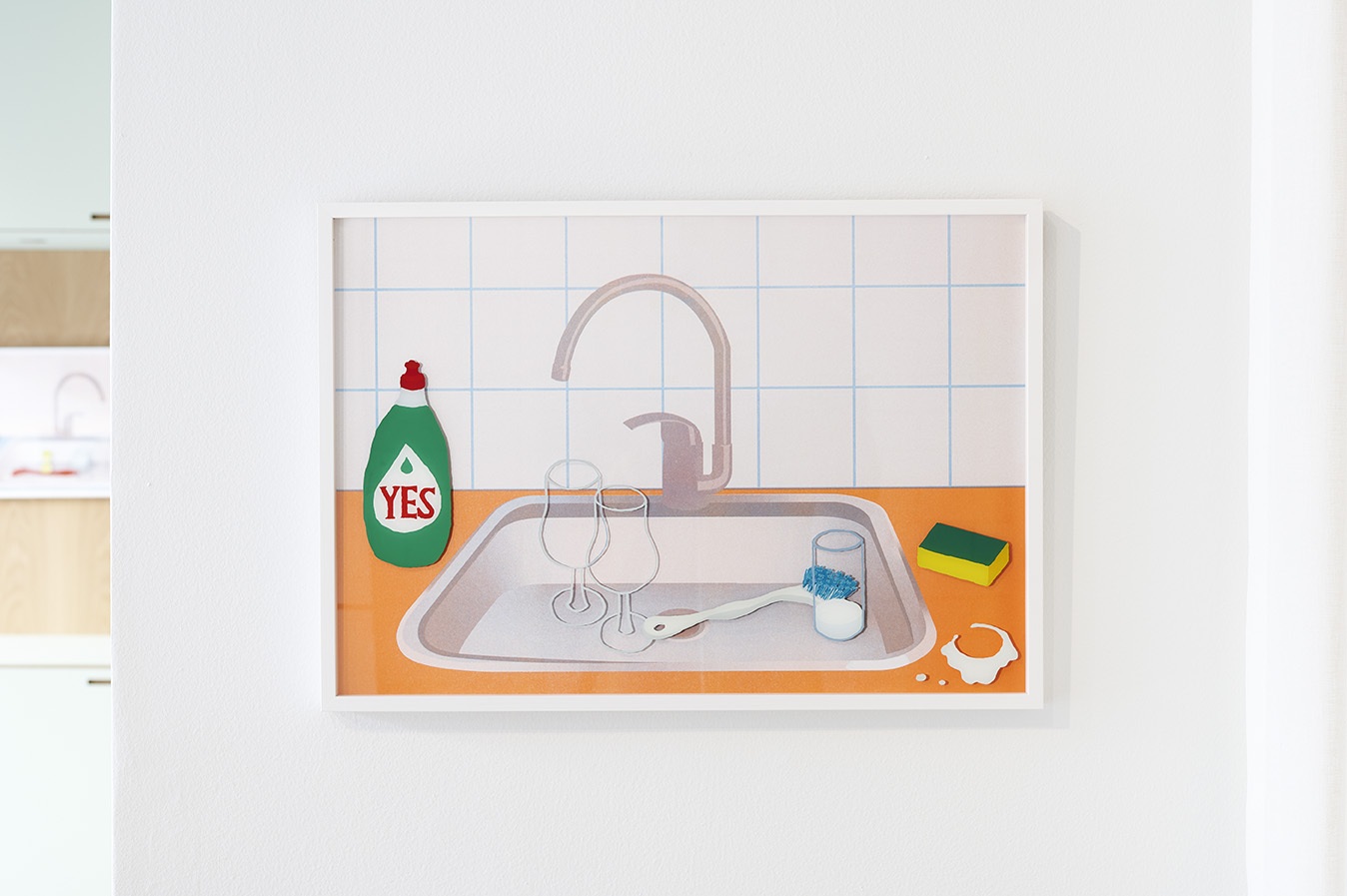 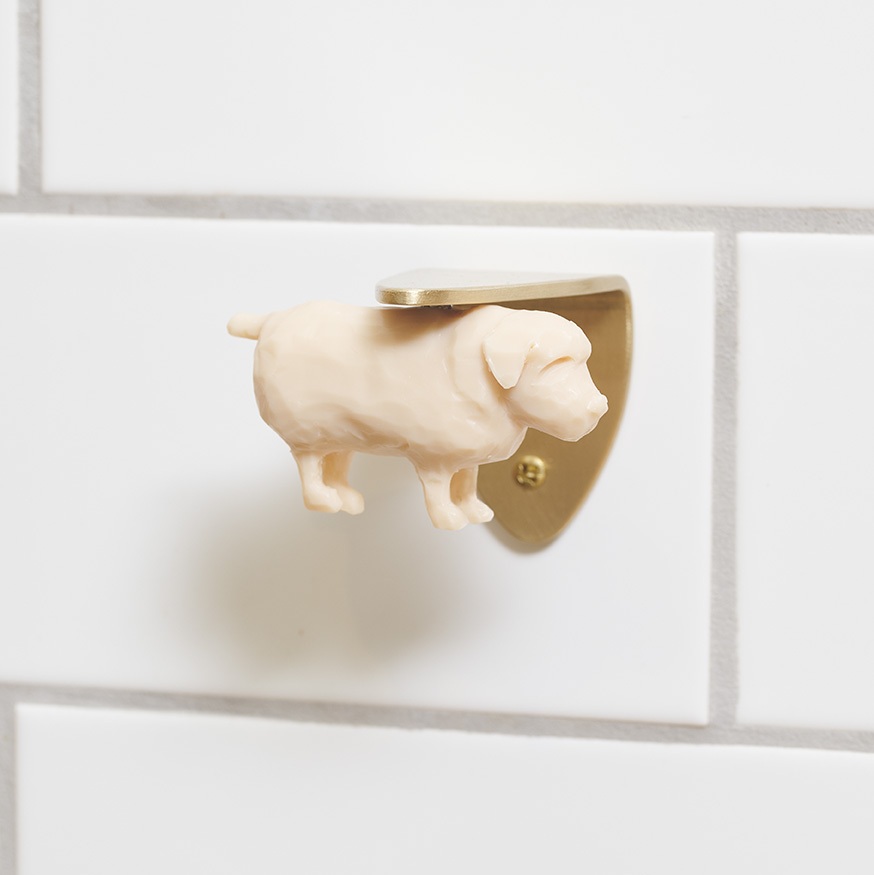 If a kitchen sink could speak, what would it say? In the exhibition SOAP Maria Gondek and Emilia Bergmark investigate the cultural and psychological narratives of domestic life, highlighting the kitchen as, either in real or imagined terms, the heart of the home. SOAP is an exhibition that foregrounds the situatedness of the kitchen within the complex, emotional, political, and temporal topography of domestic life, shedding light on how the kitchen, and the home in general, can become a repository for, and representative of human anxieties, dreams, and fears.

Under Pressure (exhaust) and Under Pressure (relief valve) is a sculptural diptych exploring the gendered social and psychological anxieties of age and bodily decline – the midlife crises if you will. The sculptures are made of pipes and tubes, structures we usually hide away in the walls and basements, these piping systems keep our houses and cars up and running. Similarly, the internal piping of the human anatomy keeps our bodies functioning. As we age, our insides age too, which may cause the piping of intestines and veins to reverberate and gurgle, an embarrassing squeak leaking from our insides to the outside world. 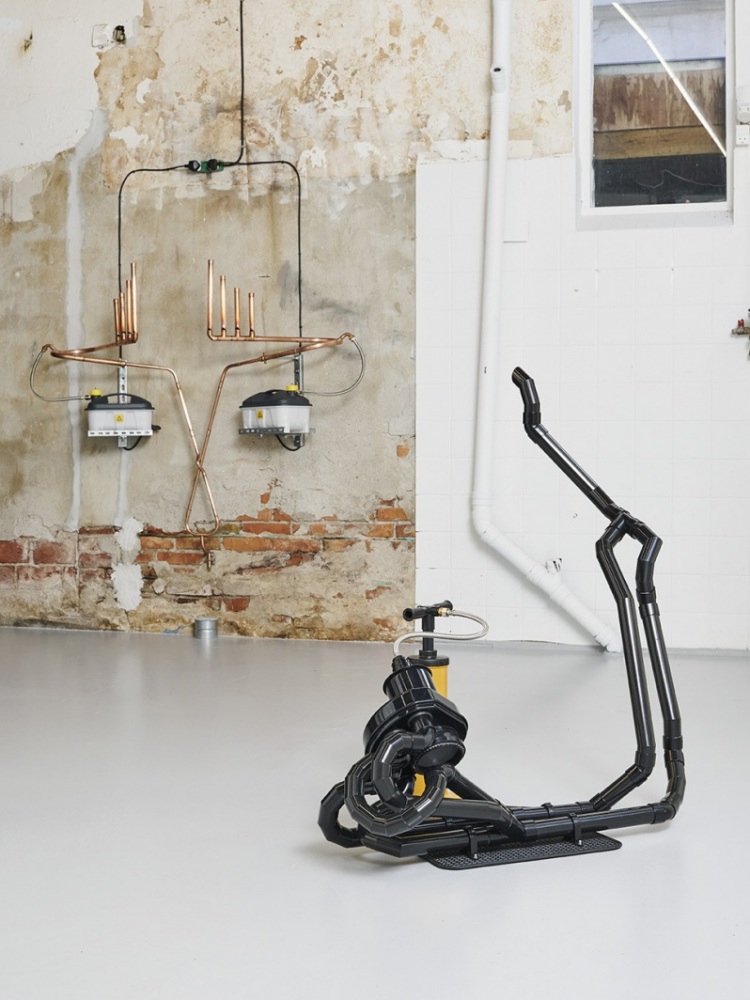 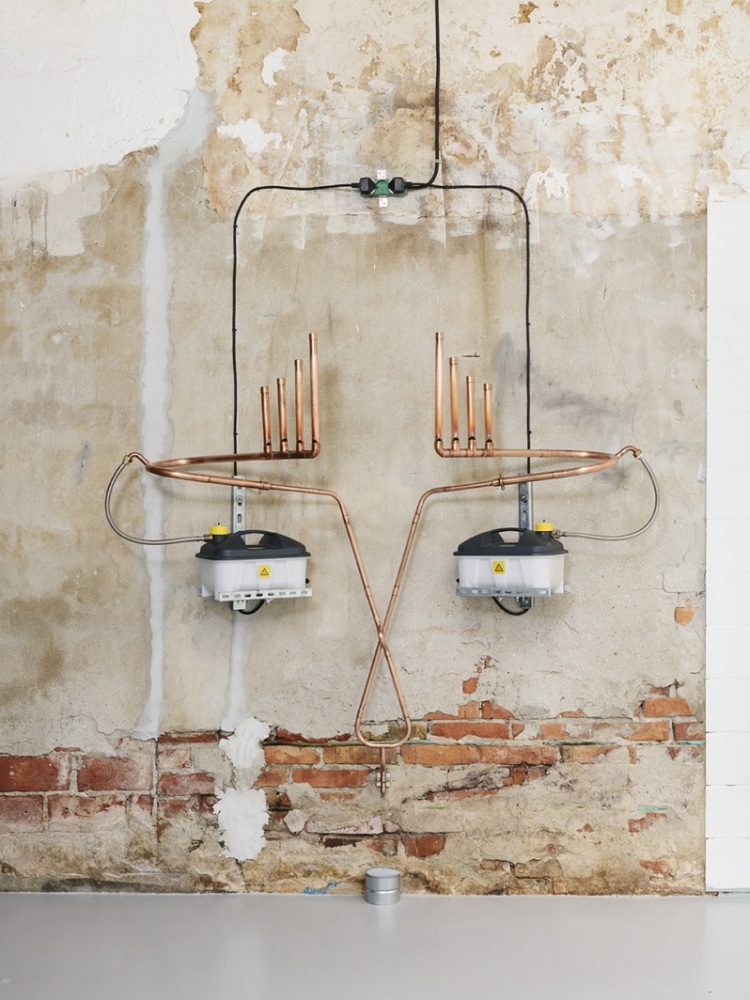 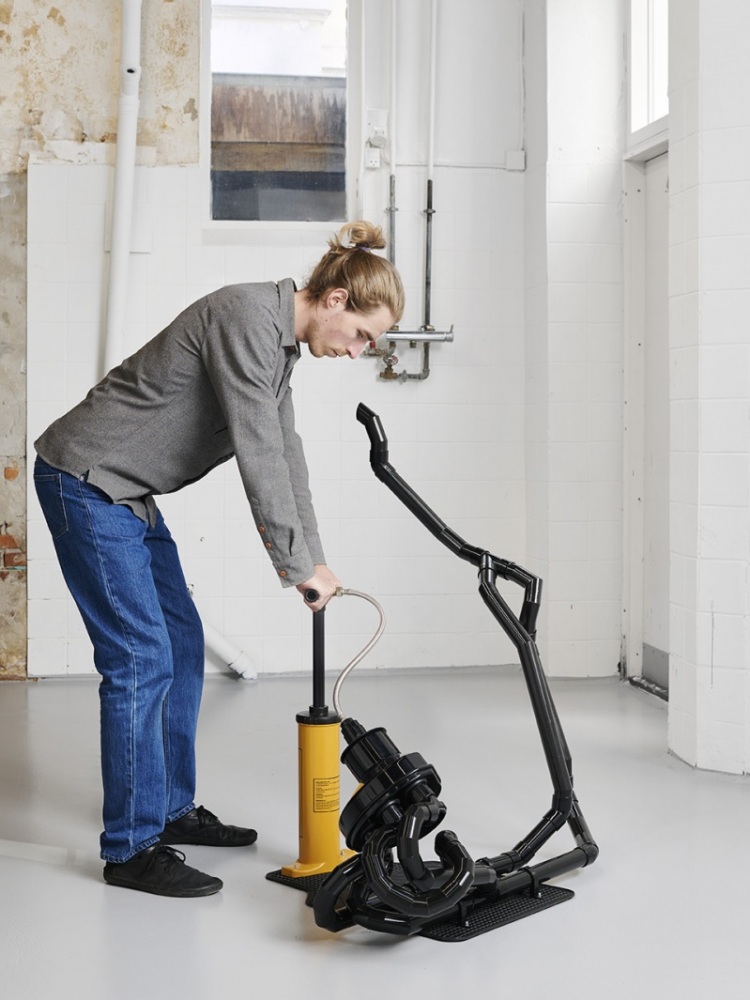 Pressure (relief valve), 2021 borrows its shape from human ovaries and when the work is activated the pipes lets out a wailing sound. The boiling water in the industrial boilers creates steam, which activates a flute, this flute in fact acts as a relief valve, it lets out the steam, keeping the pressure down and the system from collapsing.

Under Pressure (exhaust) borrows its design from the exhaust system of a car and Gondek invites the viewer to push or pull the pump to create a loud, penetrating noise, a noise which might seem fun and frivolous in some settings but, if involuntary, highly awkward. 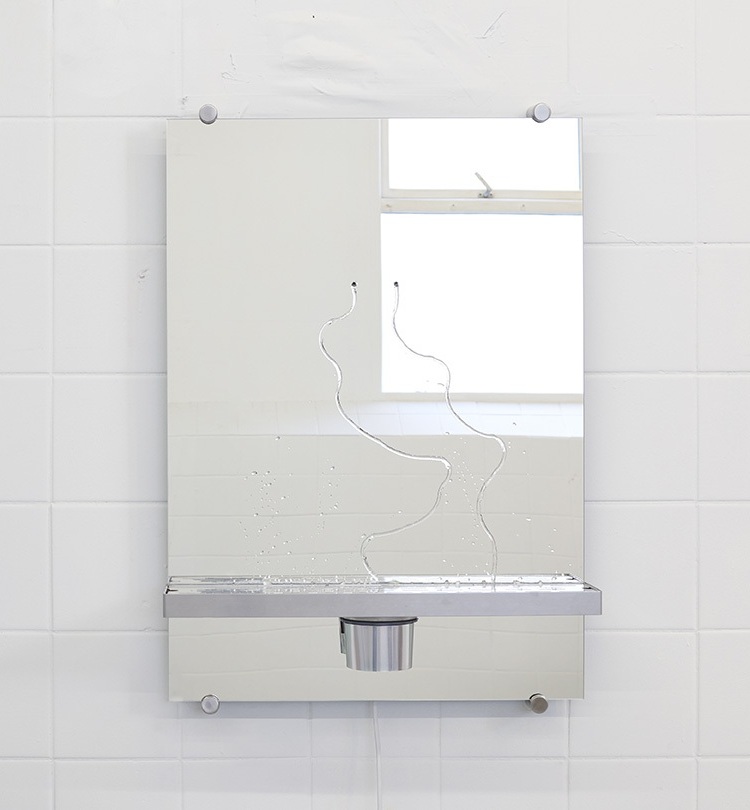 The bathroom is the place we go to cry – to turn on the water works. A private room where we can let out the emotions we do not wish to show to the world. Crying is unique to human beings – a reaction developed to signal to others that we are in distress and in need of other’s support. However, in western society crying is commonly seen as a weakness and a symptom of not being able to control your emotions. Therefore, we keep the crying to ourselves, in our private chambers. Drained (reflection) is built as a closed circuit, keeping the water flowing at all times, much like the never-ending onset of human emotions. 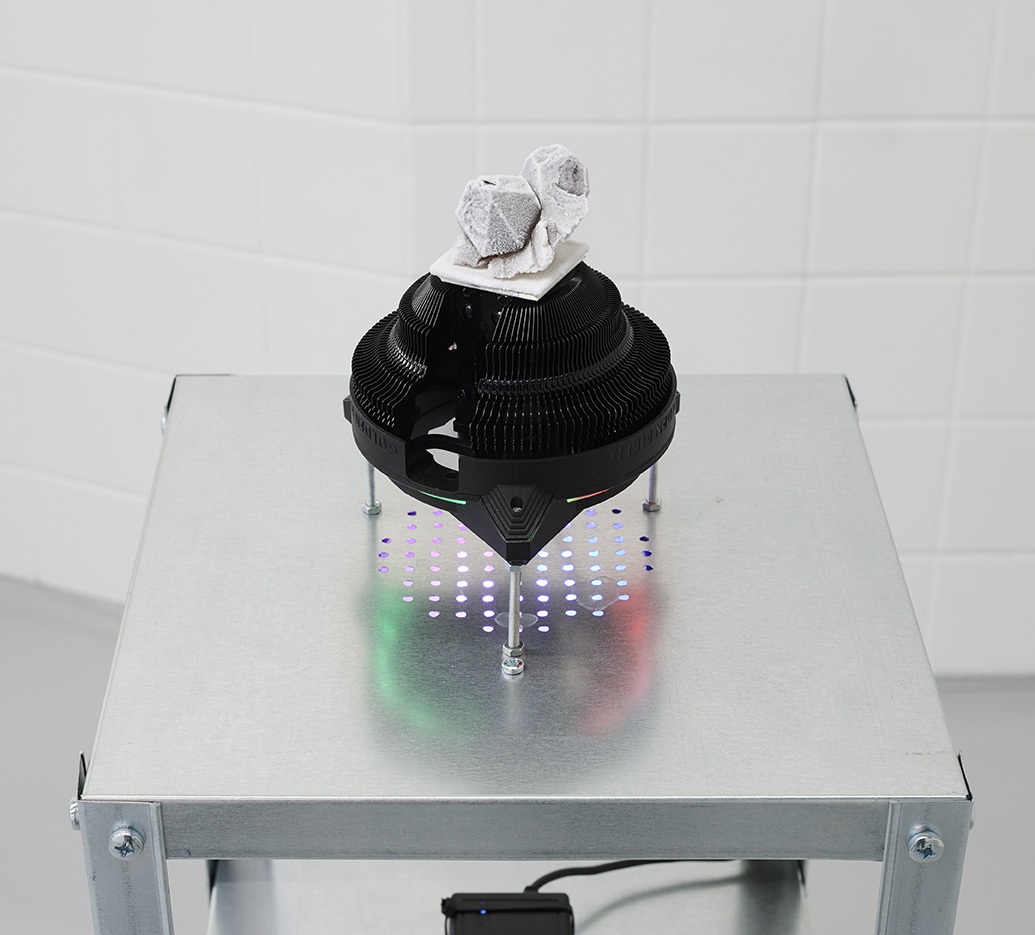 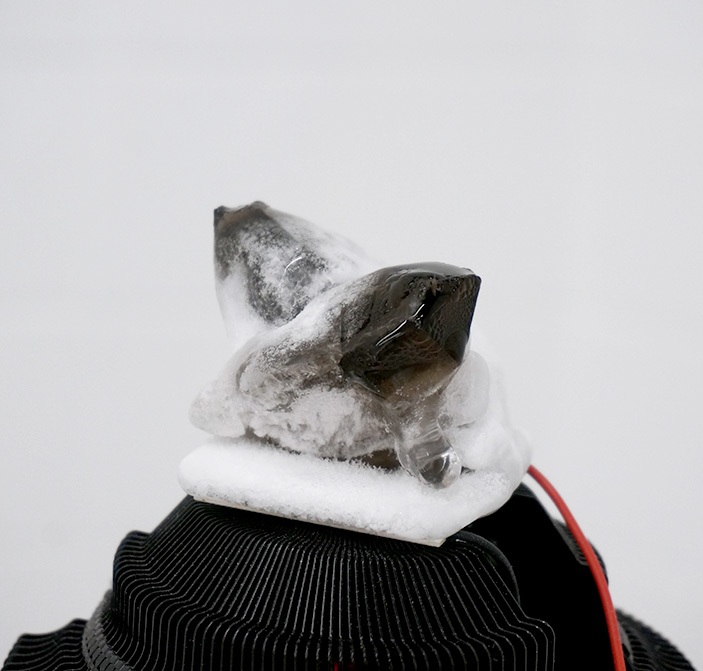 While the kitchen is considered ‘the heart of the home’, technology is increasingly the basis of our social lives, possibly making the internet router the true heart of the home. Technology is so much a part of our DNA that we cannot imagine a life without it. Technostress is a modern condition caused by an inability to cope with this speedy evolution of new technology.
In the sculpture House Plant (Technostress) a Smokey Quartz rests on a homebuilt cooling device, made from computer parts. The device keeps the temperature of the crystal below freezing, making the surrounding moisture in the air accumulate into a layer of frost.
In the world of crystal healing the Smokey Quartz is said to absorb significant amounts of negative energy, bring comfort in difficult times and provide a shield against emotional and environmental stress. However, in the world of technology, the quartz crystal is used in mechanisms for time-keeping as a crystal oscillator, making sure that the device – and its user – are always on time. It is found inside billions of electronic devices: watches, computers, rockets, smart phones and navigation systems.

The Charm Series consists of five hand carved figures made of five different types of soap. Each figure is based on an animal residing in the area around the Glasgow. They are animals that have adapted to, and thrive in, the urban environment – either as pets or as indirect beneficiaries of human activity. Carved animal talismans have been found amongst artefacts from ancient cultures and they are thought to have been spiritual objects loaded with qualities that the owner or maker might want to inhabit; strong and vicious, clever and organised, social and generous etc. The Charm Series reflects the spirituality of the modern urban human that may, in difficult times, feel the need for a modern talisman. A talisman that is cleansing and anti-bacterial, literally protecting us from viruses, sickness and death.

The pigeon is an urban animal that will live of anything. It is not picky and an opportunist by nature. The glass is always half full and thus they have succeeded so well in adapting to modern life. 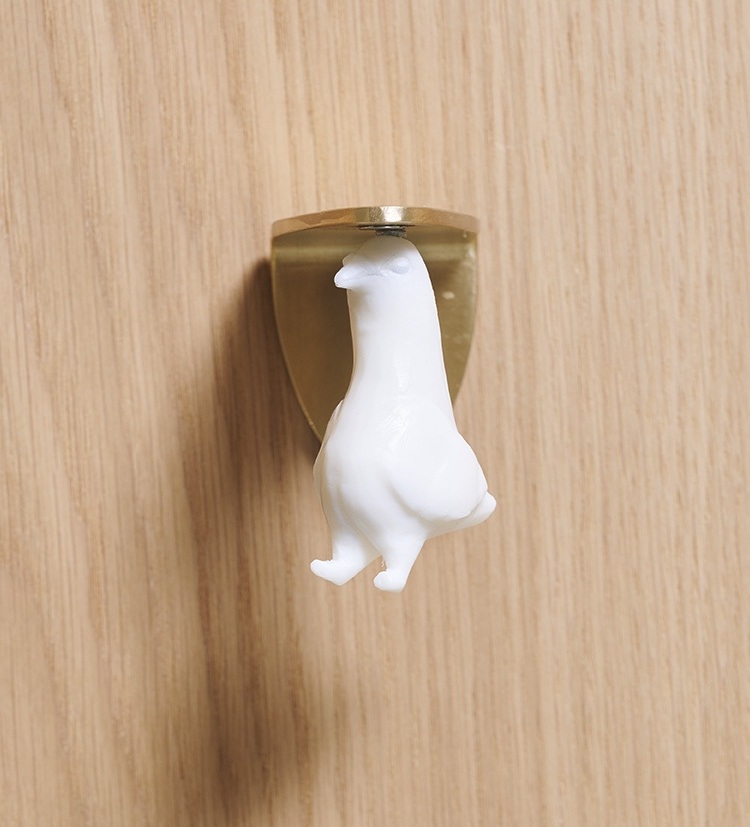 The seagull is a vicious animal that will do anything to survive. They will hunt other birds and eat each other’s chicks if needs be. They are fearless and do not veer of bigger animals like the human as such they have adapted to rule the urban landscape. 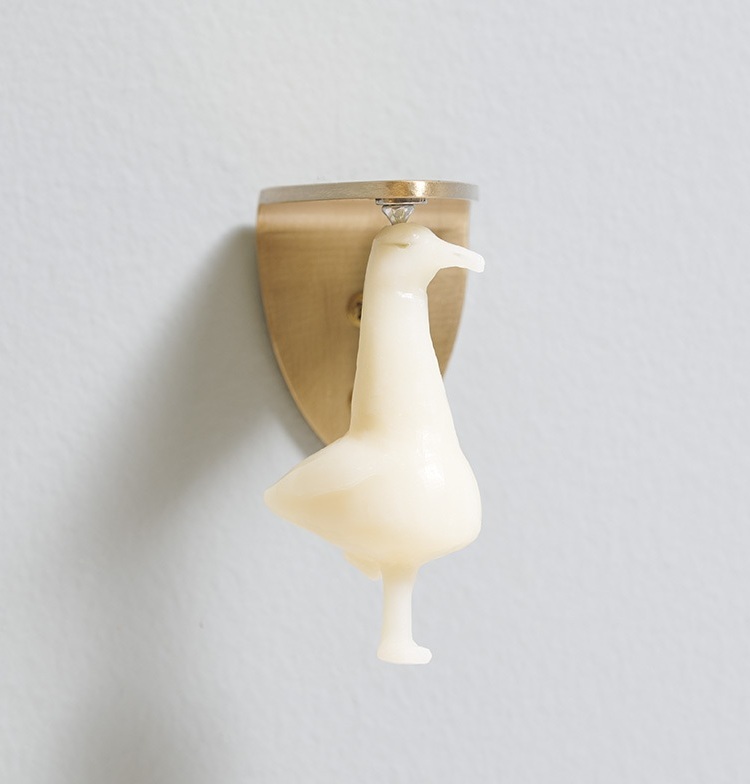 Squirrels spends their summers collecting nuts and seeds, hiding them in store for the winter. However, they tend to forget their hiding places and must trust that other squirrels do the same so that the collective winter storage holds enough for the whole squirrel community to share. 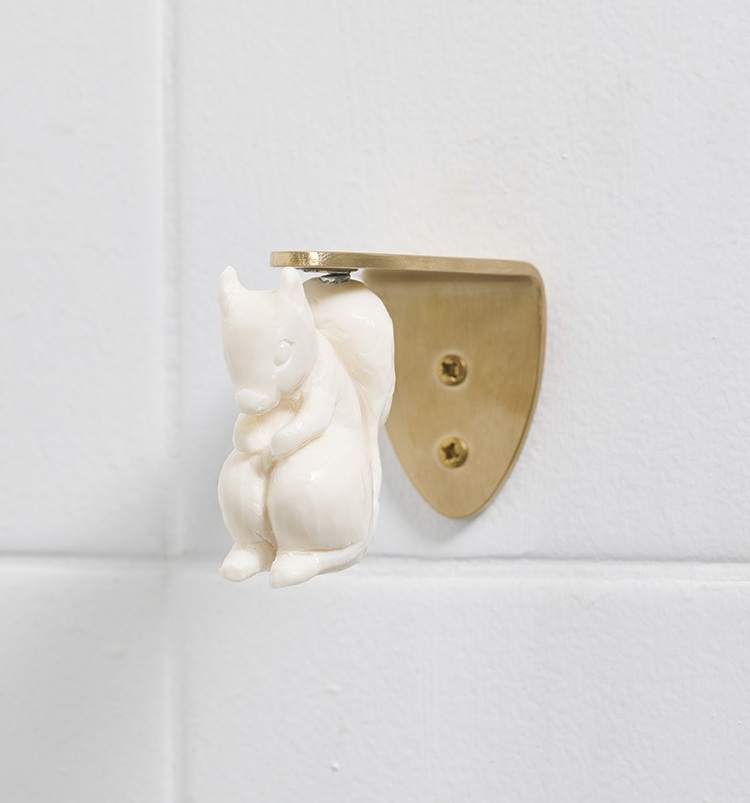 Buddy is a Yorkshire terrier living next door to the artist. His previous owner was the neighbour’s mother who unexpectedly passed away from Covid-19. Still Buddy is the most affectionate little dog that brings his new owner love and help in dealing with the pain of her mother’s passing. 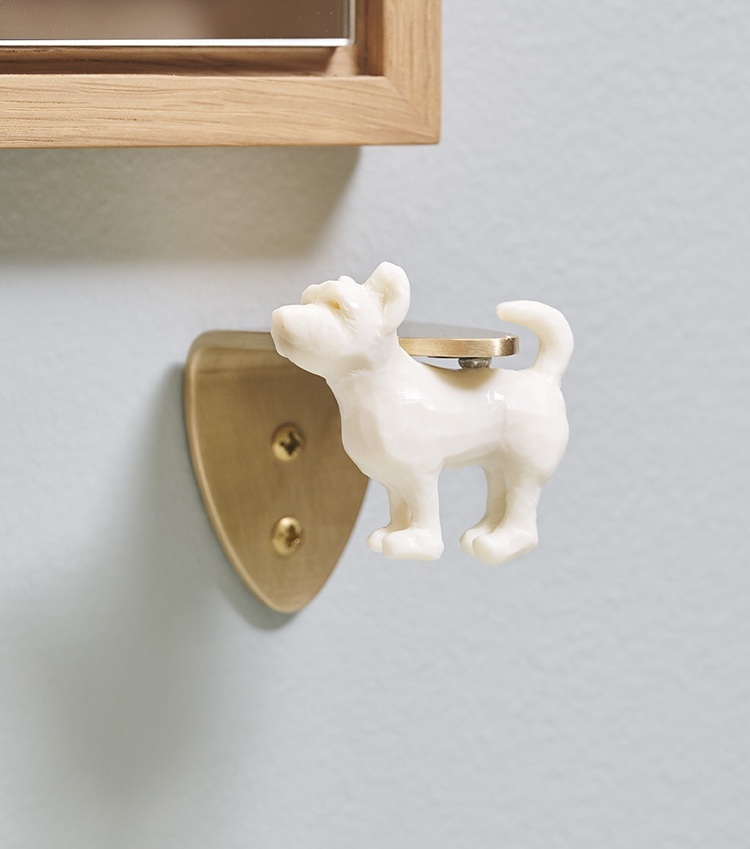 Sky is a Romanian rescue dog hat pass by the artist’s window twice a day. She is only 5 years old, but she looks twice her age being a little overweight and slow, keeping her distance to people. Sky has experienced the real world but has found her peace with her new safe haven in Glasgow. 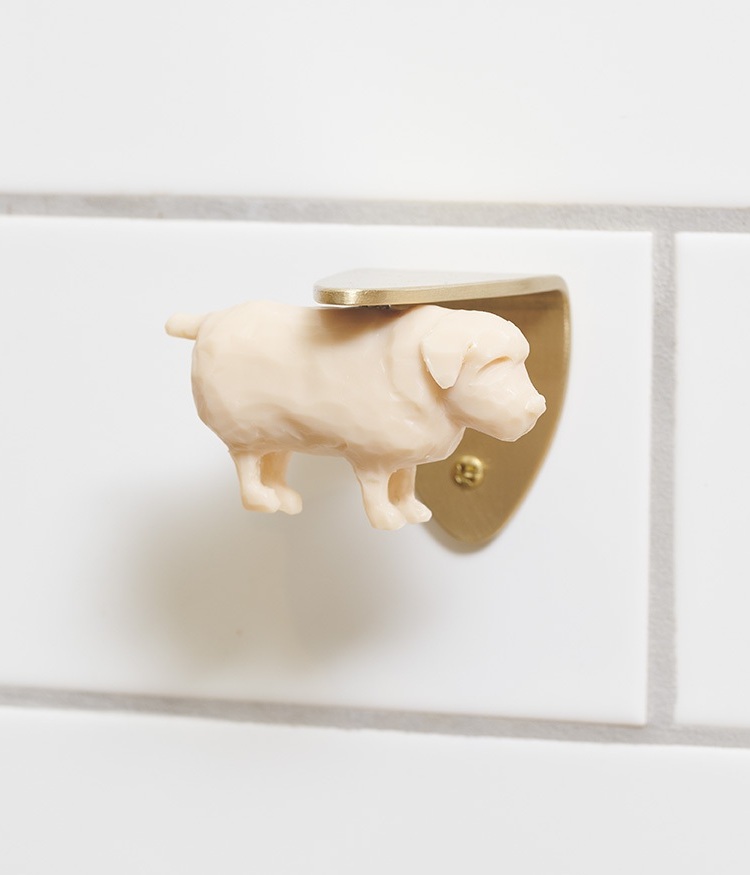